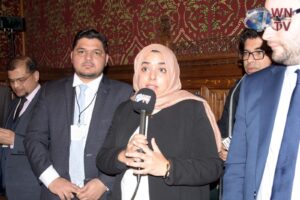 1. The seminar was chaired and hosted by Christian Wakeford MP and conducted by the Patron of the Organisation former Burnley Borough Councillor Mr. Mozaquir Ali. Secretary of the Organisation Mr Foyzun Nur welcomed the guests with his opening speech. Barrister Afzal Syed-Ali as president of BBCA presented a brief on the theme. He said these incidents of human rights violations do not happen suddenly; it follows at the end of a long process of normalisations through social structure and political system which allows for the permissive circumstances for these violations to exist.  During times of rise of extreme nationalism the state structure is abused for this purpose and the most common example is the abuse of the judiciary for these purposes. 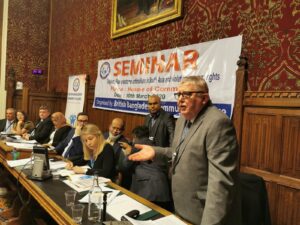 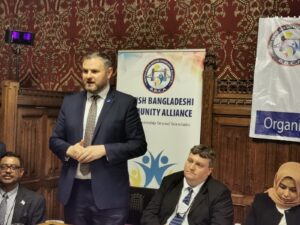 3. Lord Qurban in his speech said he went to Burma some 25 years ago and saw that anti-Muslim incitements and racial tensions were already socially acceptable then and no one paid any attention to these. The consequences of that indifference is the near perfect ethnic cleansing and genocide against the Rohingya people. Europe played the same role about the Nazis in 1920-30 without realising what were to unfold few years after. Motivations of these actors of violations in South Asia cannot be ignored and voice must be raised and actions must be taken.

4. Tehrik-e-Kashmir UK president Fahim Kyani said the Indian siege against Kashmir is only comparable to its medieval use and purpose to starve the population to submit to Indian rule. There are around fifteen thousand Kashmiri youths in Indian prisons where their parents, families do not know where they are held, state of their health or simple whether they are dead or alive. During the open session when statements from victims of torture are invited Bangladeshi former squadron leader Wahidunnabi raised the issue of continuous imprisonment of South Asia’s oldest political prisoner former Bangladeshi prime minister Mrs Zia.

5. Syed Mamnun Morshed, a grandson of sher-e-Bangla Fazlul Haq, discussed the RSS political theory and mentioned Indian Prime Minister Narendra Modi is a life member of RSS that wants India as a Muslim free land with a clear genocidal mental structure. The present Citizenship Act in India is the product of that desire.

6. Shamsul Alam Liton presented an analysis of the risks faced by broadcast journalists and civil rights activists and the organised terror they faced in line of employment.

7. Among the notable attendees were Shadow minister Afzal Khan MP, Shadow minister Kate Holland MP, youngest MP in Conservative party’s history Sara Britcliffe, British-Bangladeshi MP of Poplar-Limehouse Apsana Begum, former MP Grahame Jones, county councillor Peter Britcliffe and conservative group leader councillor Andrew Newhouse.  The common tone of their speeches was that the recent events in South Asia are disconcerting for the international community because the major incidents of violations of human rights were the results of similar mental and ideological frame that drove the anti-Muslim violence in Delhi.

8. The biggest announcement of the day came from Andrew Stephenson MP, Minsiter for Europe’s largest construction project HS2, that a policy is now under active consideration to introduce legislation in the next legislative session to have a system of addressing human rights violations issues by way of ‘Human rights Sanctions’ which will target individual actors and enablers of violations in government or outside of it who are connected to formal, informal structures of human rights violations. It will take form of, and not exhaustively, international travel ban, financial services ban and ability to work for international organisations. Minister said it would be a tremendous achievement if these could be done instead of sanctioning states and governments. British Bangladeshi Community Alliance has been promoting such a legislation for a while.